Images captured by underwater robots reveal the existence of very dense and diverse benthic communities; large coral colonies, hundreds or thousands years old; and very well developed benthic ecosystems, at depths of up to 1100 meters. The project, led by the Institute of Marine Sciences of the CSIC, studies the effect of trawling on these ecosystems and will help to establish measures that make fishing compatible with the preservation of these ecosystems. 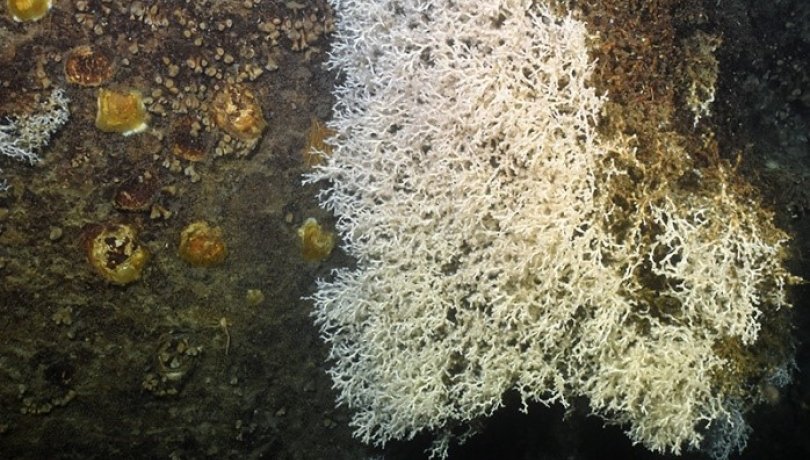 White coral at unprecedented depths of 1100 meters; dense and well-structured benthic communities with notable differences between them; large coral colonies, hundreds and even thousands of years old. These are some of the discoveries made in the Blanes submarine canyon, within the framework of the ABRIC project, led by Pere Puig, marine geologist at ICM-CSIC.

The Blanes canyon, whose head is about 5 km from the coast, is like a valley on the sea floor, about 60 km long and half a kilometre wide, with vertical and vaulted walls, which descends to approximately 2300 metres in depth. In its walls have recently been discovered extensive and dense colonies of deep cold water corals, which live at temperatures of about 13 º C.  It is an oasis of biodiversity, a shelter to numerous fish and juvenile crustaceans, with numerous species of coral and associated gorgonians, some of them protected and in danger of extinction.

Back in 2017, during a previous ICM-CSIC project to study the effect of trawling on deep marine sediments, Pere Puig team discovered enclaves with great abundance of these coral colonies in Blanes Canyon. Now, the scientists of the Institute of Marine Sciences, in collaboration with international researchers, have been exploring the area, on board the CSIC oceanographic vessel Sarmiento de Gamboa.

In a first phase of the oceanographic campaign, which began in mid-February, the scientists have explored three areas of the canyon, two on the north side, closer to the fishing grounds, and a third on the east side, using two remotely operated underwater robots: the ROV Liropus, from the Spanish Institute of Oceanography (IEO) and the ROV Ariane, from the French Research Institute for the Exploitation of the Sea (IFREMER).

In the second phase of the campaign, carried out during the last days of February, the scientists have extended the study areas and have characterized these environments in more detail.

"It has been a pleasant surprise to discover that in the Blanes canyon there are many environments with very well developed and structured benthic communities, with very different species among them," says Pere Puig, project leader.  This may be due to the morphology of the canyon itself. "Compared to other canyons in the Mediterranean," Puig points out, "the Blanes canyon has many faults and fractures, which have generated environments with vertical walls, terraces and rocky outcrops, which is where the corals are located, and is what has probably allowed the formation of enclaves with very different communities.

"We have found very dense coral colonies. The corals are of different sizes, most of them large, but there are also small colonies. The latter is a good sign, because it means that the communities are still growing and expanding” he adds.

For his part, Jordi Grinyó, a CSIC biologist at the Institute of Marine Sciences, explains: "we were surprised to see a zoning of the species. There are areas dominated by reef-forming corals, such as Lophelia pertusa or Madrepora oculata, others dominated by black corals such as Leiopathes glaberrima or gorgonians such as Callagorgia verticillata or Muriceides lepida, which until now was considered a rare species but which is very abundant here".

The transition of species on the vertical walls has also attracted the attention of scientists. "For example, as we were climbing with the robots from 1,000 to 600 meters deep, we saw how the dominant species were changing. For example, at a depth of 1,000 meters we observed reefs of Neopycnodon zibrowii oysters, which are rarely seen alive, and progressively the dominant species were changing to different species of corals and later to gorgonians," explains Jordi Grinyó.

The images obtained with the underwater robots allow us to see coral species that have been little documented in the Mediterranean, and to confirm the presence of large colonies. "Given the growth rates we know about these species, they could be centuries-old or even millennial colonies," points out Pere Puig. This is the case of the black coral Leopathes glaberrima, of which they have found colonies of more than two metres.

"It's not so unusual to find black coral in the Mediterranean," says Meri Bilan, a biologist from the University of Salento (Italy) who will be writing her doctoral thesis with these scientific results, "but it's not so rare to find such extensive and long-standing colonies. Their growth is extremely slow. White coral grows at a rate of approximately 1 cm per year. The black coral grows only a fraction of a millimetre per year".

Scientists have also seen corals that have settled and are growing on old longline lines that were left hooked and abandoned on the canyon walls.

Studying the effect of fishing

Scientists are surprised by the good condition of these communities, despite the proximity of the fishing grounds a few hundred meters away, and point out that the canyon's vaulted walls may have offered protection from falling sediments. The fact is that trawling periodically moves sediments up the slope, from the canyon flanks, where the fishing grounds are located, to its axis, where they end up accumulating.

It is not known what effect such a sediment shower may have on the coral communities. To find out, the scientists have installed five anchors with oceanographic instruments in different parts of the canyon, which will record the sedimentary dynamics around these communities over a four-month period: current meters, to record marine currents; sediment traps, to collect falling sediments; and turbidity meters, to analyse the turbidity of the water.

The sediment traps have automated opening and closing compartments to collect weekly 'rain' of sediment separately. This allows us to know the differences between weeks, and between periods of closure and fishing activity.

They have also taken water samples to analyse its organic composition. Later, they will extract sediment cores to analyse their composition over time in order to evaluate accumulation rates and the effects of fishing in the past and present.

The scientists have also collected some samples of coral and gorgonians, which will allow them to carry out studies of adaptation to increased water turbidity, date their age, study their growth rate, and even confirm whether any of the specimens discovered correspond to new species.

The project will help establish measures that will make fishing compatible with the preservation of these ecosystems, whose existence is beneficial to both the marine environment and the fishing sector.