From April 24 to 26, more than 70 people from the International Ocean Vector Winds Science Team (IOVWST) have met at the Institute of Marine Sciences in Barcelona. 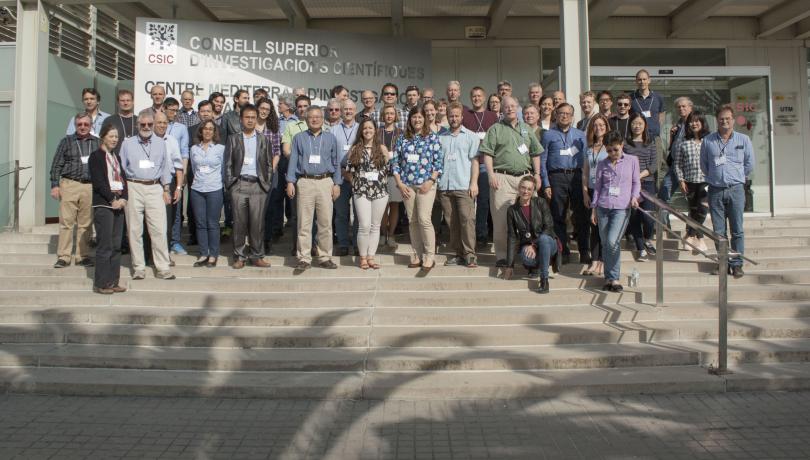 From April 24 to 26, more than 70 people from the International Ocean Vector Winds Science Team (IOVWST) have met at the Institute of Marine Sciences in Barcelona.

The IOVWST is an international research group focused on satellite-derived ocean surface wind retrievals and related applications. The group counts with the participation of NASA, EUMETSAT, NOAA, the Indian (ISRO) and Japanese (JAXA) space agencies and the Chinese National Satellite Ocean Application Service (NSOAS) as main entities, meteorological centres such as the European Center for Medium-Range Weather Forecasts (ECMWF), the Royal Netherlands Meteorological Institute (KNMI) and the Portuguese Institute for the Sea and the Atmosphere (IPMA); and oceanographic centres around the world, including the Institute of Marine Sciences (CSIC), the Woods Hole Oceanographic Institution (WHOI) and the Scripps Institution of Oceanography. The Barcelona Expert Center (BEC), a joint venture between ICM-CSIC and the Technical University of Catalonia (UPC), is involved in this group, through its satellite winds research line led by Marcos Portabella.

The group started its international activity in 2010. Since then, it has met every year in different countries. The Institute of Marine Sciences, which hosted its first meeting 8 years ago, is once again the group meeting point.

The research and operational centres and agencies participating in IOVWST use satellite data to study the sea surface winds. These data are essential to develop oceanographic, meteorological and climate applications. They are fed, directly or indirectly, into atmospheric, oceanic and climate models to improve short, medium and long-term weather forecasts and sea state predictions, among others.

Other active research lines within this group are, for example, the development of climate series or the optimization of extreme-wind observations (such as estimation of position, intensity and structure of the hurricanes and extra-tropical cyclones) and coastal winds, which are important for, e.g., navigation, search & rescue, mitigation of natural disasters, tourism or coastal planning.

In addition to its research activity, the group also has an advisory role on the design of future systems and on the exploitation of satellite-derived wind data  from current and past systems, including their interpretation and applications.