Understanding how earthquakes occur is one of the main open questions in the field of seismology. Decades of research have not been enough to establish a model to predict earthquake’s behaviour neither to explain the systematic variation of the properties of their seismic rupture observed according to the depth where they initiate. This situation has often led to underestimate their capacity to generate tsunamis, making it difficult to develop early warning systems in areas affected by large and great earthquakes. 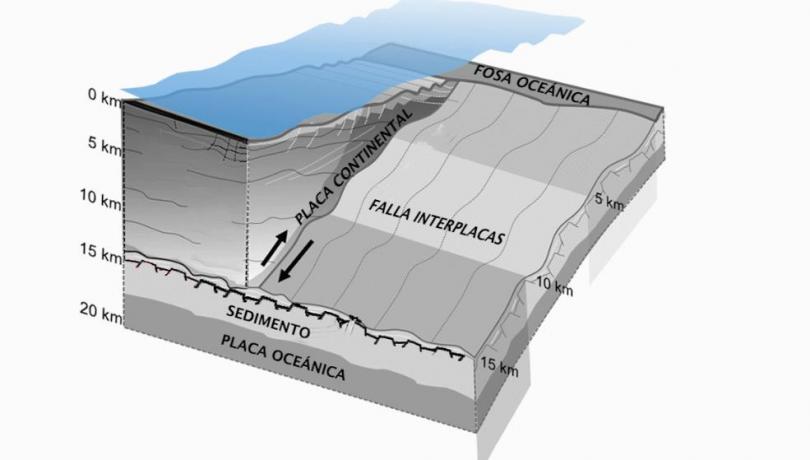 Understanding how earthquakes occur is one of the main open questions in the field of seismology. Decades of research have not been enough to establish a model to predict earthquake’s behaviour neither to explain the systematic variation of the properties of their seismic rupture observed according to the depth where they initiate. This situation has often led to underestimate their capacity to generate tsunamis, making it difficult to develop early warning systems in areas affected by large and great earthquakes.

A study carried out by Valentí Sallarès, a CSIC researcher, and César R. Ranero, ICREA researcher, both at the Institute of Marine Sciences of Barcelona of the CSIC, which stands for Spanish National Council for Scientific Research, ​​proposes a paradigm shift and presents a new conceptual model that allows explaining various essential characteristics of earthquakes that have puzzled scientists so far. Also, the new model allows to better quantify the risk predicting tsunamigenic potential with unprecedented precision. The work is published today in Nature.

Scientists show that the variation in rock rigidity, a parameter that has never been analysed in detail so far, is the main factor that explains some of the most relevant characteristics of earthquake rupture. Therefore, this parameters should be studied in locations and added to the estimation of risk associated with earthquakes and tsunamis. The rigidity variations of the rocks with depth allow solving unexplained paradoxes so far, such as why some earthquakes causing moderate seismic movements on land, have triggered large tsunamis, as it happened with several historical earthquakes.

“Our work shows that the differences between the behaviour of deep and shallow earthquakes are not due to local variations in the physical mechanism that produces them, which is what was assumed so far, but to systematic changes in the rigidity  of the rocks that fracture and deform during the seismic rupture”, explains Valentí Sallarès, ICM-CSIC researcher and lead author of the work.

Seismic records show that earthquakes rupturing the shallow portions of tectonic faults propagate slowly, have a longer duration and unexplained larger-than-predicted slip in the fault, causing greater than expected deformation of the ocean floor, particularly compared to deeper earthquakes of equal magnitude. However, shallow rupture  generates less pronounced seismic vibrations on the surface. Therefore, the risk they carry is generally underestimated, especially their unexplained -to this study- capacity to generate tsunamis, or tsunamigenic potential.

A tragic example took place in Sanriku (Japan) in 1896, when a tsunami up to 38 meters high devastated several coastal towns causing more than 22,000 victims. The arrival of the tsunami took local residents completely off guard, because the intensity of the earthquake that preceded it was moderate compared to the dimensions of the tsunami.

Similalry, tsunamis generated by recent major earthquakes in Indonesia (2004) and Japan (2011), which ruptured to near the surface, were equally larger than expected, leading to  dramatic and unforeseen situations such as the flooding of the Fukushima nuclear power plant.

The CSIC study has analyzed seismic images of the subsurface, similar to radiographs, combined with tomographic models of the velocity propagations of seismic waves. Those data have been used to infer the rigidy of rocks at different depths in subduction zones around the world.

The study shows that the rigidity of the rocks that rest on the mega-thrust fault, where earthquakes are generated, increases systematically with depth, following a world-wide well-defined trend (which appears associated to the progressive decrease of rock fracturing and alteration with depth). This trend explains the differences between shallow and deeper earthquakes, allowing in turn to accurately predict the speed of propagation and duration of seismic rupture, the amount of slip on faults, variations in amplitude of the seismic vibrations generated, and the differences in estimated earthquake magnitude.

The implications of this discovery are broad. “It is the first model that allows to predict certain characteristics of an earthquake based on the depth of its hypocenter and this is a key to estimate its tsunamigenic potential accurately. As a matter of fact, many of the abnormally large tsunamis that have occurred in history, including the one of 2011 in Japan, can be explained for the first time by our model”, says Sallarès.

Until now, the variations with depth in rupture behaviour of earthquakes, including the amount of slip and the duration or the surface-wave magnitude, were attributed to local factors that were believed to affect the mechanics of the faults causing the earthquakes. However, none of the models proposed until now could explain all the characteristics and differences observed, nor the relationships between them. This study carried out at the CSIC’s Institute of Marine Sciences of Barcelona represents a fundamental change in understanding.