A research project led by Rafel Simó, of the Department of Marine Biology and Oceanography, has been selected for the Antarctic Circumnavigation Expedition (ACE), an initiative of the recently created Polar Swiss Institute. From December 2016 to March 2017, scientific teams from all over the world will board the Russian research ship Akademik Treshnikov for this expedition around Antarctica. 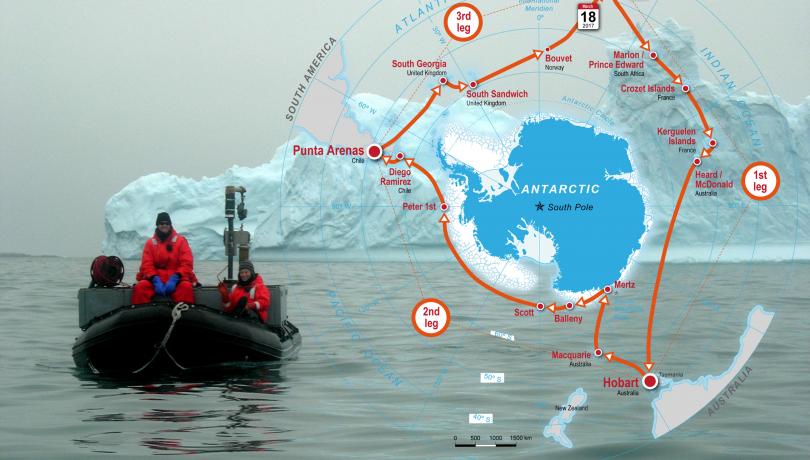 A research project led by Rafel Simó, of the Department of Marine Biology and Oceanography, has been selected for the Antarctic Circumnavigation Expedition (ACE), an initiative of the recently created Polar Swiss Institute. From December 2016 to March 2017, scientific teams from all over the world will board the Russian research ship Akademik Treshnikov for this expedition around Antarctica. Simó’s project, called SORPASSO (Surveying Organic Reactive gases and Particles Across the Surface Southern Ocean), aims to make measurements of gases and particles released by the ocean that play important roles in the atmosphere.

Many chemical reactions occur in the atmosphere. These reactions affect air transparency, clean it of pollutants, regulate ozone levels and contribute to cloud formation. “We want to know how life in the ocean, the microscopic plankton, affects this chemical reactor which is the atmosphere”, Rafel Simó says. The main hypothesis of the project is that plankton activity explains the atmospheric composition in austral latitudes. However, as the researcher points out, “in order to test this hypothesis, quantifying the plankton is not enough; we also need to know their composition and physiology”. In this context, the SORPASSO project represents the first of its kind that will be conducted in the whole Southern Ocean.

Measurements around the Antarctica are particularly interesting because the white continent is far away from human activity and, as Simó highlights, “it gives us a good picture of the preindustrial conditions of the marine atmosphere”. His research group made a similar study in 2015, yet only in a particular area north of the Weddell Sea. For Simó, this will be the fourth trip to Antarctic waters, now with the privilege to have a panoramic view of the entire austral region. “Nowadays, the funding capabilities in Spain would have difficulties to afford an expedition of such a magnitude. In this sense, an international initiative as the ACE, covered in large part by private funding, makes real a dream of great scientific interest. It is a unique opportunity”, he acknowledges.

The Antarctic Circumnavigation Expedition brings together scientists from 30 countries from the 6 continents, grouped in 22 projects that were selected from more than 100 proposals on marine, atmospheric and island ecology research.  During three months, the Akademik Treshnikov icebreaker will carry a maximum of 54 researchers with the purpose of measuring and quantifying the impact of climate change and pollution on the Southern Ocean and on the islands of the subantarctic belt. The projects cover a wide spectrum of topics that include plankton composition and their relationship to the environment, threatened animal species, the presence of microplastics in the ocean, the carbon cycle, microorganisms that flourish in the ocean depths or in ice, or the impact of waves on the coasts. The expedition is an initiative of the Swiss Polar Institute, a new research centre based at the Swiss Federal Institute of Technology in Lausanne, and is sponsored by the businessman and polar explorer Frederik Paulsen.