On June 19, the Barcelona Expert Center of Remote Sensing (BEC), will celebrate a day to commemorate its ten years of existence. It will take place in the Institute of Marine Sciences of ​​the CSIC in Barcelona. 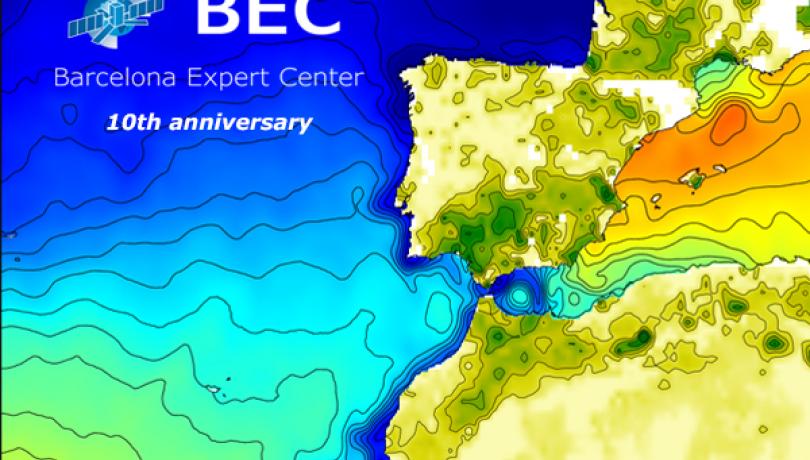 On June 19, the Barcelona Expert Center of Remote Sensing (BEC), will celebrate a day to commemorate its ten years of existence. It will take place in the Institute of Marine Sciences of ​​the CSIC in Barcelona.

The day will be attended by the CSIC researcher Jordi Font, founder of BEC and one of the principal investigators of the SMOS mission; Susanne Mecklenburg of ESA and Mission Manager of SMOS; Cristina de la Puente, Vice-President of the CSIC; Andrea Pérez Carro, CDTI, Spanish delegate at ESA; And Meritxell Serret, Councilor for Agriculture, Livestock, Fisheries and Food of the Generalitat de Catalunya.

Researchers from the CSIC and the Polytechnic University of Catalonia (UPC) involved in the SMOS will also participate, along with representatives of companies (Airbus, Tryo Aeropace, Deimos) and other scientific institutions that will talk about the technological and social impact of the mission, as well as the applications.
Among other applications, the Mediterranean salinity maps will be presented, which has managed to obtain the BEC, the only center in the world that produces and distributes these maps. To do this, they have developed methods that improve spatial and temporal resolution, and allow daily salinity maps with a resolution of 5 km each day. These maps provide information on the state of the sea and allow us to anticipate if there will be heavy rainfall.

The BEC was created in 2007 under the leadership of Jordi Font, to prepare data processing for the European Space Agency's (ESA) SMOS (Soil Moisture and Ocean Salinity) mission, launched in space in 2009. It was created as a joint initiative of the CSIC, through the Department of Physical and Technological Oceanography of the Institute of Marine Sciences (ICM), and the Universitat Politècnica de Catalunya (UPC), through the Remote Sensing Lab, and later the Institut d'Estudis Espacials de Catalunya (IEEC) joined this initiative. Antonio Turiel, CSIC researcher, is the current president of the BEC; Carolina Gabarró, researcher at CSIC, is the director.

The SMOS satellite collects data on soil moisture and sea salinity, two key variables for understanding the water cycle and improving our understanding of the climate. However, the raw data of the satellite must be processed and refined to obtain, from them, products such as moisture and salinity maps useful to the scientific community. This is precisely the mission of the BEC.

Among its achievements, the center developed a method for integrating low resolution SMOS data with complementary information from other higher resolution sensors to generate the first moisture maps with a resolution of only 1 km. These maps allow different uses, such as knowing the useful water content in the soil by the plants and predicting the productivity of the fields, or evaluating the fire risk in specific areas and therefore being able to take preventive measures (cleaning the forests or Create firewalls) in a more targeted and efficient way, among others.
The knowledge of the surface salinity of the sea allows to improve the estimations of the marine currents, to report on the biological activity and the presence of fish banks, and to estimate the degree of evaporation of the surface of the sea to anticipate phenomena of heavy precipitation on land with an anticipation that can be up to two months.
Since its inception, the Center has provided support to ESA for the calibration of the SMOS satellite instrument, as well as data validation and the improvement of its processing algorithms. For some time, the BEC has expanded its interests and is also concerned with the study of winds over the sea and the evolution of sea ice. It has also begun to incorporate data from other satellites and sensors, both active and passive. Over time, the BEC has become a reference in its field, and receives each year students and scientists from other institutions.