A group of ICM researchers has coordinated the installation of a device able to transform the fiber optic cabling into a seismic network of sensors that detects ground motion. 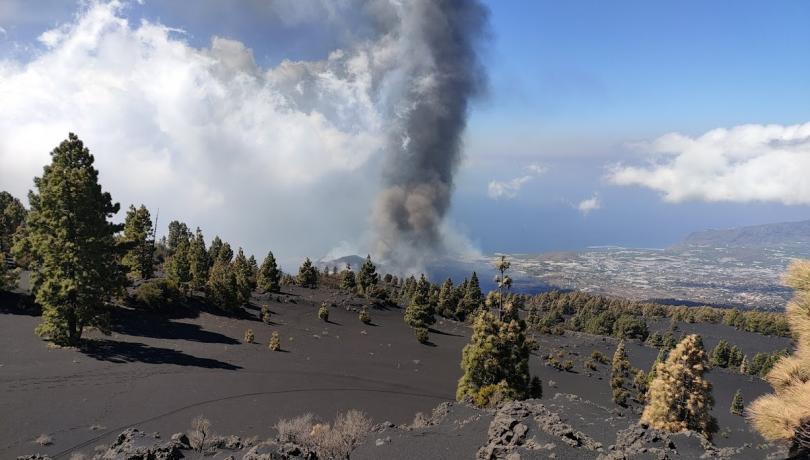 The data acquired will complement those obtained by conventional seismographs currently in operation on La Palma / Stavros Meletlidis (IGN).

A group of researchers from the Institut de Ciències del Mar (ICM) in Barcelona has coordinated the installation, on the Canary Island of La Palma, of a DAS (Distributed Acoustic Sensing) interrogator on the fiber optic cabling used by the Roque de los Muchachos Observatory (ORM) of the Instituto de Astrofísica de Canarias (IAC) to connect to the Spanish Academic and Research Network RedIRIS.

This instrument will improve the monitoring of the seismic activity generated by the eruption of the Cumbre Vieja volcano, which has been active for more than a month, by transforming one of the ORM's fiber optic cables, approximately 8 kilometrers long, into a seismic network of thousands of sensors that detect ground motion.

The interrogator has been developed by the Photonics Engineering Group of the University of Alcalá de Henares (UAH) and the CSIC Institute of Optics (IO-CSIC). This instrument uses strands of the fiber cable not used for data transmission (known as dark fiber) to carry out the measurements, while the other strands are used to transmit the seismic signals and distribute them rapidly to the National Geographic Institute (IGN) and the Volcanological Institute of the Canary Islands (INVOLCAN), the institutions monitoring the seismic activity in La Palma.

"The data acquired with this instrument will complement those obtained by the seismic networks of conventional seismographs currently working in La Palma. Also, due to the large number of sensors -one for every 10 meters of cable- provided by the DAS, it will be possible to carry out studies that are difficult using conventional seismographs, such as, for example, determining the location of volcanic tremor and its change over time", explains ICM researcher Antonio Villaseñor, who has coordinated the installation of the interrogator.

Villaseñor adds that the installation of this instrument on La Palma "means the innovative use of two large scientific infrastructures (ORM and RedIRIS) to respond to societal needs with applications for which they were not originally designed".

This is not the first time the ICM has used DAS technology to detect earthquakes. It already did so last year when it transformed the submarine communications cables connecting the islands of Tenerife and Gran Canaria -an area of high seismic activity- into a sensor network capable of detecting both local and distant earthquakes.

DAS devices emit pulses of laser light through the optical fiber and measure the tiny fractions of signal reflected from microscopic imperfections inside the cable. These become reference points that vary in position as a result of external factors such as ground vibrations. Thus, a single cable connected to a single measuring device can become a network of thousands of sensors.

Although still an emerging technology, the study of seismology using fiber optics has come a long way in recent years and has been successfully employed on several occasions. For example, in 2018, these DAS devices installed in the Pasadena (California) metropolitan area detected, more than 9,000 kilometers from the epicenter, an earthquake that occurred in the Fiji Islands.