A study by the Seabird Ecology Group of the University of Barcelona in which the ICM has participated reveals that nearly 50% of the food resources of these birds today come from landfills or meat industries in Girona, Spain. 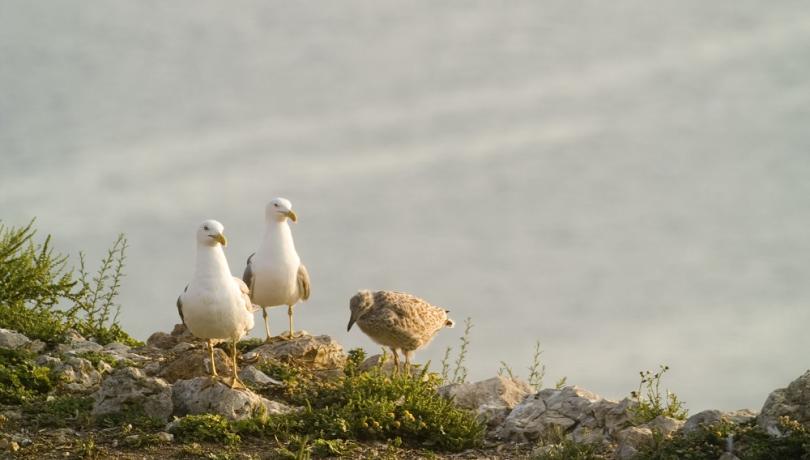 The yellow-legged gull is a species with a high capacity to adapt to habitats transformed by human action / Raúl Ramos, UB-IRBio.

The diet of the yellow-legged gull in the Medes Islands has changed extremely over the last decades, according to a study that analyses the changes in the diet of this species over the last twenty years. Regarding these gulls, which eat strictly marine resources, landfills and meat industries  ̶ which are abundant in the area ̶  currently provide around 50% of the food resources of these birds.

The growth of human population in the study area –apart from the abundance and availability of organic waste in landfills– would explain the current feeding pattern of the gulls, a species with a high ability to adopt to those habitats that have changed due to human activity. Parallelly, the high availability of food has triggered the populations of gulls, a situation that involves some problems related to direct and indirect interaction between seabirds and people.

The study, published in the journal Ecological Indicators, is led by members of the Group on Seabird Ecology of the Faculty of Biology and the Biodiversity Research Institute (IRBio) of the University of Barcelona. Among the participants are the Institute of Marine Sciences (ICM-CSIC) and the Animal Health Research Centre (CReSA) of the Institute of Agrifood Research and Technology (IRTA).

The Larus michahellis yellow-legged gull is a completely adapted species to the use of human-origin food subsidies. This bird, which was originally marine, is nowadays abundant in places with many humans, from the coast side to inland.

“This species has a great feeding and behavioural plasticity, and this allows it to feed from sandwiches in school courtyards, to food remains from meat industries, through fishing discards and waste in landfills”, notes researcher Jazel Ouled-Cheikh, first author of the article and member of the Department of Evolutionary Biology, Ecology and Environmental Sciences of the UB, IRBio and ICM-CSIC. “These food habits –adds the expert– turn it into a potential disease vector, apart from favouring demographic explosions, and therefore, it is necessary to study and understand the species to manage the populations and prevent potential conflicts”.

In the study, the Group on Seabird Ecology details how the diet of the yellow-legged gull of the Medes Islands (Girona) has changed over the last twenty years.  Through the analysis of stable isotopes, the study determines the elementary compounds of the feathers of the gulls to estimate and quantify their diet. The analysed samples come from samples of chicks conducted in situ in the Medes Islands during the breeding season of the species during the 2004-2018 period. The temporary perspective of the study is extended thanks to the analysis of samples of feathers of dissected models from the Darder Museum in Banyoles and the Natural History Museum of Barcelona; a first-year juvenile gull which died in 1916 and three more juvenile that died in the nineties, taken near the Medes Islands.

The findings of the study reveal several significant changes in the diet of the yellow-legged gull during the study period: "Specifically, the seagull diet has gone from being based on a 70% marine contribution –mainly fish–in 1916, to values of about 30%", says the expert Jazel Ouled-Sheikh. “However, –he continues– the contribution of elements from landfills (meat products and other leftovers) was relatively low in 1916. The contribution of this resource to the diet of seagulls grew during the 1990s, until stabilizing around 50% in the present”.

“These variations in the diet of the yellow-legged gull population of the Medes Islands over time could be explained basically by two oscillating and closely related factors: the population size of the study colony and the availability of different food subsidies in the environment", says the tenure-track 2 lecturer Raül Ramos (UB-IRBio).

The availability of different food subsidies changes enormously in both time and space. The yellow-legged gull, like many other opportunistic species, can adapt to these variations by modifying its feeding strategy. Thus, individuals from different places may have very different diets depending on the local availability of these resources.

“Therefore, the individuals can adapt their schedules and diet to the temporal patterns presented by the human activities that generate these subsidies. For example, they are able to change their diet on weekends when there is no fishing and, therefore, no fishing discards”, says Francisco Ramírez, member of IRBio and ICM-CSIC. "From an ecological point of view, this plasticity gives them a certain advantage over other more specialized, and often competing, species that can be affected".

A new scenario for seabirds

This situation of changes will be further exacerbated by teh European Union-driven policies that will reduce the accessibility of seagulls to food subsidies. In this context, it is important to highlight the community guidelines such as the Landfill Directive, which will lead to a significant reduction in the available waste at landfills. Likewise, the present and future application of the European Landing Obligation policy –the ban on dumping discards, the main food source for many seabirds today–could end the image of seabirds following the route of the fishing boats to eat from them.

“If we consider the lack of food availability of the seagull (at least two of the three sources described in the study: landfill remains and fishing discards), in addition to the difficulty of covering the energy demand of these birds exclusively with the consumption of terrestrial invertebrates, everything points to a greater presence of seagulls in urban areas in the not-that-distant future, without forgetting the problems this situation involves”, warn the researchers.

“It is essential, therefore, to continue monitoring the Medes Islands gull colony, which is one of the most important in the Mediterranean. This monitoring must consider both the eating habits of this population of gulls and the movements of the specimens (using GPS devices, for example), as well as the study of their role as a reservoir of pathogenic microorganisms that they can transmit", says Marta Cerdà, researcher at IRTA-CReSA. "Only in this way will we be able to have quality scientific data to find the reasons that push this species to interact more and more intensely and closely with human society, and all the associated risks that this brings".