A new model predicts how plankton will adapt to environmental changes

This new approach developed by the ICM, the IEO and JAMSTEC represents, for the first time, the adaptive evolution of phytoplankton to climate change and will help to improve predictions of its response to upcoming changes. 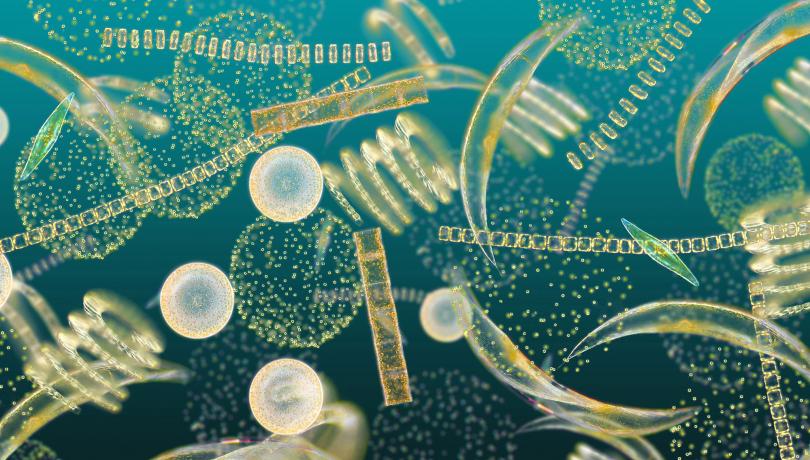 Phytoplankton are unicellular algae that account for 45% of global photosynthesis and are at the basis of marine food webs. It is estimated that these organisms transport at least 5 gigatonnes (Gt) of carbon to the deep ocean every year, which is equivalent to 50% of the current anthropogenic carbon emissions. Therefore, estimating phytoplankton changes in abundance and composition due to global warming is key, since they may have large consequences for the global climate and fisheries.

Now, a group of researchers from the Institut de Ciències del Mar  (ICM), the Spanish Institute of Oceanography (IEO), and the Japan Agency for Marine-Earth Science and Technology (JAMSTEC) have made a key step towards understanding the response of phytoplankton to climate change by developing a numerical model called SPEAD (Simulating Plankton Evolution with Adaptive Dynamics) which evaluates plankton adaptation to environmental changes.

The details of this model can be found in an article published recently in the journal Geoscientific Model Development that describes how the new model SPEAD makes it possible for the first time to simulate the evolution of two physiological traits in a phytoplankton population: the affinity for a nutrient and the optimal temperature for growth.

Until now, state-of-the-art ecosystem models divided plankton into different species or groups with fixed nutrient, temperature, and light niches. In these ecological models, the only possible response of plankton to environmental changes was the replacement of some species by others better adapted to the new environment, through the ecological selection of the fittest. However, due to their short generation time of around one division per day, phytoplankton species are known to evolve fast enough to be able to adapt to changing environmental conditions in only a few decades.

The model allows to simulate variations in specific algal characteristics

SPEAD adds adaptive evolution to the simulations by having a prescribed percentage of offspring at each generation with a physiological mutation of their nutrient affinity or their optimal temperature.

So far, SPEAD has been validated against observations in the Sargasso Sea (in the North Atlantic). Also, values of mutation rates allowing for adaptive evolution at decadal timescales have been recommended for future use.

“Imagine that out of 100 offspring 4 differ from their parents, either in their optimal temperature or in their affinity for the nutrient. Mutating faster makes many cells poorly adapted to their current environment. Mutating slower prevents phytoplankton to adapt to future environmental changes”, explains the ICM researcher Guillaume Le Gland, first author of this study.

According to the authors, in the near future, SPEAD will be coupled to a general circulation model of the ocean to predict the response of phytoplankton to global warming scenarios in terms of productivity (amount of carbon fixed), biological carbon pump (amount of carbon exported to the deep ocean), and contribution of functional groups, such as diatoms, dinoflagellates or cyanobacteria, to plankton communities.

To date, models predict that global warming will reduce global productivity and that in temperate regions it will favor small phytoplankton cells, such as cyanobacteria, at the expense of larger cells, such as diatoms, in temperate regions. As cyanobacteria sink more slowly than diatoms, this change would reduce the biological carbon pump, and thus accelerate global warming. However, if diatoms are able to adapt to the new ecological niches instead of being replaced by cyanobacteria, the predicted decrease in global productivity and the biological pump would be slower than expected.

“The SPEAD model is an important step forward in the development of the next generation of ocean planktonic ecosystem models that will allow us to improve predictions of how plankton and biogeochemical fluxes will respond to ocean warming during the XXI century”, explains the ICM-CSIC researcher Pedro Cermeño, who has also participated in the study.

Other contemporary ecological issues, such as the spatial and temporal distribution of plankton diversity or the relationship between biodiversity and ecosystem functioning, may also be addressed by this new generation of eco-evolutionary models.

This research has been supported by the Spanish Ministry of Science, Innovation, and Universities through the research grant “Simulating Plankton Evolution with Adaptive Dynamics".