A new study led by the ICM shows that sea ice melt increases particles formed from gases released by microorganisms that inhabit the sea ice, which fosters cloud formation and could help to reduce the solar radiation received by the region. 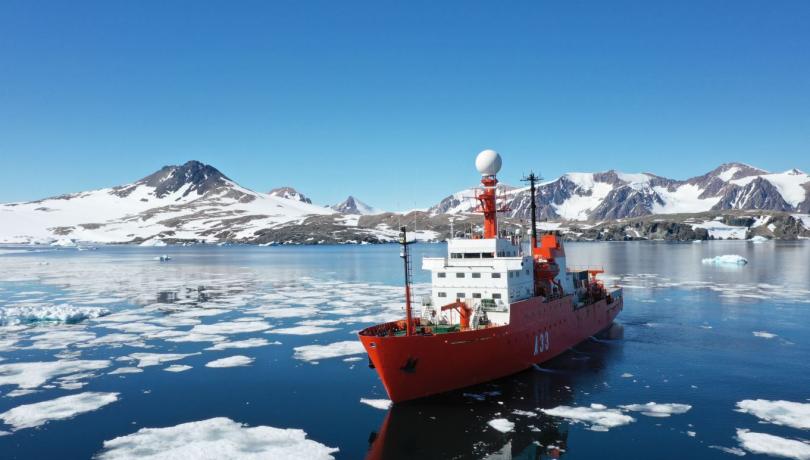 A new study led by the Institut de Ciències del Mar (ICM) and the University of Birmingham (UK) has revealed that Antarctic sea ice melt enhances the formation of aerosols in the atmosphere, which in turn favours cloud formation in summer and could help reduce the solar radiation received by the region and have important climate consequences.

Clouds play a key role in regulating the Earth’s temperature by reflecting and filtering solar radiation, and without them the climate would be much warmer. However, very little is currently known about how they form, and this limits the accuracy of climate projections.

What is known is that cloud formation requires the presence of small atmospheric particles called aerosols that allow water to condense and form droplets. Many of these aerosols come from human activity, but in remote regions of the planet they originate mostly from natural processes such as wind-driven upwelling of sea salt and gases of biological origin in the ocean.

For the preparation of the work, published this week in the journal Nature Geoscience, the research team has used data collected during the PI-ICE 2019 Antarctic campaign, led by ICM's Ramon y Cajal researcher Manuel Dall'Osto. As part of this campaign, which lasted more than three months, an international team of researchers analysed airborne suspended particles in the region surrounding the Antarctic Peninsula.

By these means, researchers found that when air masses come from areas around the sea ice margin, aerosol formation episodes are more frequent. According to the study, these air masses contain high concentrations of sulphuric acid and amines, which are compounds of biological origin that interact with each other to transform from gases to particles.

Although the role of sulphuric acid in the formation of polar aerosols was already known, this is the first study that demonstrates the key role of amines, nitrogen-containing organic compounds produced by the degradation of organic matter by micro-organisms that inhabit the sea ice. This confirms that emissions from marine plankton and sea ice melt play a crucial role in regulating Antarctic climate.

"We already knew the importance of organic nitrogen for the formation of aerosols and clouds in temperate terrestrial environments, but during the 2019 PI-ICE expedition we were able to use instruments that have allowed us to prove the importance of this process in Antarctica", explains Dall'Osto, who adds that "this discovery will force us to revise the models of the effect of marine life on climate regulation".

"In a previous expedition (PEGASO 2015) we had already observed the emission of amines from sea ice, but until now we had not shown that these substances allow the formation of new aerosols in a region so far away from any human activity and with such a clean atmosphere", states another author of the study, the ICM researcher Rafel Simó. He is now immersed in preparing, together with Dall'Osto, a new campaign that will take place in 2023 and will attempt to delve deeper into the complex climate machinery that results from the interactions between the ocean, the ice, the life in there and the atmosphere.

Antarctica is currently undergoing dramatic climate change that is difficult to predict, partly because there is little knowledge available about the consequences of ecosystem changes on aerosol and cloud formation.

Current climate models underestimate the abundance of clouds over the Southern Ocean and therefore overestimate the solar radiation reaching these cold waters. Therefore, the publication of studies such as this one is essential to improving future projections.

The PI-ICE campaign that made this study possible was part of the Spanish Antarctic Programme and was funded by the State Research Agency and the European Regional Development Funds.