This is an experiment by the ICM, the UPC and the UAB at the OBSEA underwater observatory to see how the presence of the carcass affects the benthic and fish communities in the area. 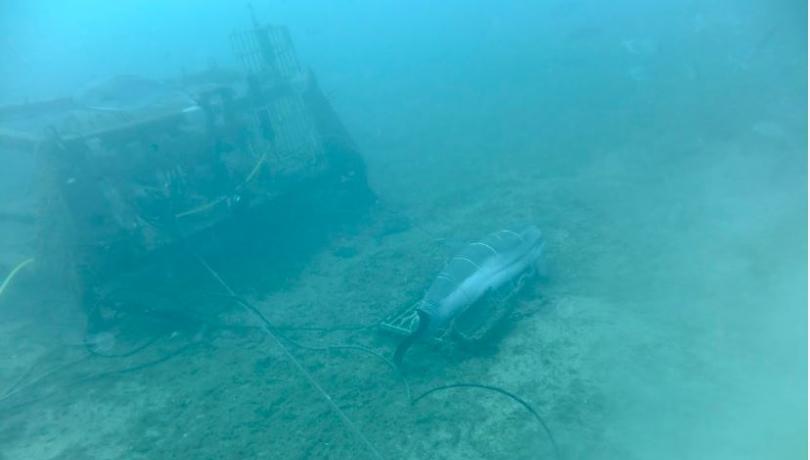 A few days ago, a man from Blanes (Girona) warned of the presence, next to the sand of S'Abanell beach, of a dead dolphin of the species Stenella coeruleoalba, one of the most common in the Mediterranean Sea. In order to determine the causes of its death, the animal was transferred to the Veterinary Faculty of the Autonomous University of Barcelona (UAB).

After performing the necropsy, the body was taken to the OBSEA underwater observatory in Vilanova i la Geltrú (Barcelona), where a group of researchers from the Institut de Ciències del Mar (ICM), the Veterinary Faculty of the UAB, the Catalan Ministry of Territory and Sustainability and the SARTI-MAR group of the Universitat Politècnica de Catalunya · BarcelonaTech (UPC), which operates the OBSEA, anchored it in front of the Observatory's video surveillance camera to study the effect of its presence on benthic ecosystems and fish communities -including commercial species- in the area.

This information will be complemented with data on the temperature and salinity of the water, as well as the speed and direction of currents at this point, among other environmental variables.

"Over the last few years we have studied the presence and absence of species according to these variables, but now the presence of the dolphin may alter the results we have obtained up to now and attract species that we would not see under normal conditions", says Joaquín del Río, director of the UPC SARTI-MAR research group and head of the OBSEA.

"All this will help to interpret the environmental processes associated with the decomposition of the carcass in coastal environments with innovative technology", add the ICM researchers Jordi Grinyó and Jacopo Aguzzi.

This type of experiment had not yet been carried out in Mediterranean waters, so the main actors involved in the decomposition of marine mammal carcasses in the Mediterranean, which can range from bacteria to cephalopods or predators such as sharks, remain unknown.

In other areas of the world, however, similar studies have been carried out on deep-sea benthic ecosystems. In 2002, for example, scientists at the Monterey Bay Aquarium Research Institute (MBARI) in California (USA) were able to observe, thanks to an underwater robot, how a dead whale on the seabed caused major spatial and temporal changes in the local marine community. Also, in 2017, the Japan Agency for Marine-Earth Science and Technology (JAMSTEC) carried out, together with the ICM, the same observations with a whale carcass located at a depth of 500m.

"High-frequency, real-time monitoring of the ecosystem's evolution is possible thanks to the current infrastructure of the OBSEA observatory, where research projects such as RESBIO (UPC-ICM) have been developed in recent years, which precisely enable remote monitoring of biological indicators", explains del Río.

The fall of a marine mammal on the seabed can provide an amount of organic matter equivalent to that which falls over several thousand years through the water column in the form of marine snow, which is made up of all organisms that die in the ocean and are not consumed by their predators.

As has been observed on other occasions, when a marine mammal falls to the bottom, the scavengers have enough in a few days to gobble up the flesh that covers the bones of the carcass. From then on, different populations of polychaete worms, crustaceans, molluscs and other opportunistic invertebrates will colonize the surface of the bones in a few months.

Finally, when these communities have ingested all of the easily digestible organic material, the bacterial community will come into play, taking advantage of the fats and oils found inside the bones of the carcass. At the same time, this process will release compounds that will serve to feed other types of microorganisms, in this case chemosynthetics, from which other organisms will live.