A new study by the ICM and the Norwegian Polar Institute links the decline experienced by Arctic seabird populations with the sea ice retreat over the last decades. 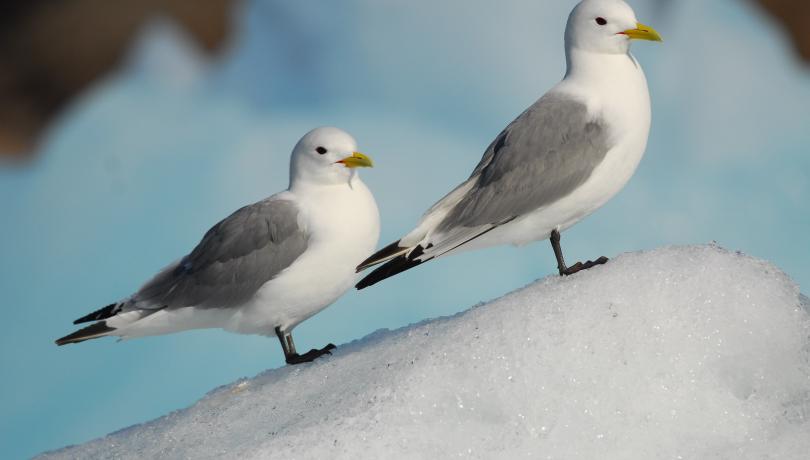 A new study by the Institut de Ciències del Mar (ICM) of Barcelona and the Norwegian Polar Institute (NPI) has revealed that sea-ice loss is threatening the future of Arctic seabird populations, most of which forage preferentially at sea ice edges and feed on ice-associated fish and crustaceans.

The work, published recently in the specialized journal Diversity and Distributions, has evaluated the relationship between sea ice retreat over the last decades with concurrent declines in Arctic seabird populations and provides some of the very few empirical evidence linking changes in the cryosphere -the frozen water part of the Earth system- and the population dynamics of Arctic top-predators.

“The Arctic is warming faster than any other region on Earth, and this have led to a very rapid and pronounced reduction in sea ice extent, thickness and seasonal duration that is expected to have profound effects on Arctic wildlife”, explains the NPI researcher Sébastien Descamps, who adds that “since population responses by Arctic organisms to sea ice loss is not always straightforward, with different species and populations often responding in different ways, studies like this are key to understand the impact of sea-ice loss on Arctic ecosystems”.

To carry out the study, researchers conducted some fieldwork in Svalbard, a Norwegian, high-Arctic Archipelago, with two of the most common Arctic seabirds, the Brünnich's guillemot (Uria lomvia) and black-legged kittiwake (Rissa tridactyla), which feed basically on ice-associated organisms and, thus, constitute ideal model species to evaluating the importance of sea ice conditions and population dynamics for Arctic species.

During the 1988-2018 period, several colonies of these two species were monitored and their population sizes were assessed. This long-term monitoring revealed that both species have declined in Svalbard from the mid-1990s onwards. The new analyses carried out in Svalbard not only disclose similar long-term trends in seabird and sea ice dynamics, but also unveil that sea ice concentration is associated with seabird colony size with a 2-year lag.

Although this study provides consistent evidence pointing to the role of Arctic sea ice retreat in explaining seabird population declines, it is worth noting that variations in sea ice explained only a relatively small proportion of the observed changes in colony sizes. This suggests that other local to regional factors/stressors are also driving kittiwake and guillemot dynamics.

In this regard, the authors point out that the presence of glaciers that release large volumes of melt water may create profitable feeding areas and small-scale foraging hotspots for surface-feeding seabirds, such as kittiwakes. Accordingly, the impact of ocean warming and sea-ice melting on Artic organisms is likely site- and species-specific.

“Given this scenario, long-term and broad monitoring programs aimed at evaluating population dynamics for a wide range of Arctic species would be desirable if we want to understand what the future Arctic may look like in the face of climate change”, conclude the researchers.