In 1st April 2014, a quake around the northern city of Iquique reached a magnitude of 8.1 and triggered a tsunami. Despite that magnitude, experts were surprised that the quake was not as large and damaging as expected, and that it affected only a limited region. 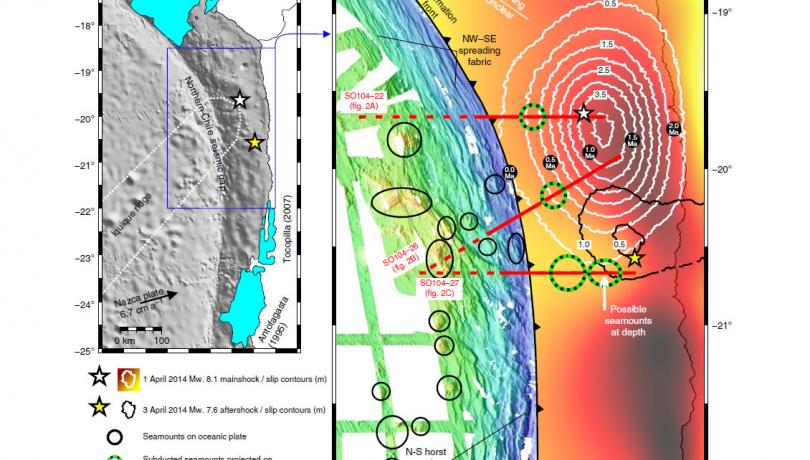 In 1st April 2014, a quake around the northern city of Iquique reached a magnitude of 8.1 and triggered a tsunami. Despite that magnitude, experts were surprised that the quake was not as large and damaging as expected, and that it affected only a limited region. Geologists from the ICM, the Helmholtz Centre for Ocean Research Kiel (GEOMAR), and the German Institute for Geosciences and Natural Resources now presented a possible explanation for the smaller than expected tremor. They published their findings in the international journal Nature Communications.

The reason for the high earthquake frequency in Chile lies just off the coast where the oceanic Nazca plate, one of several tectonic plates in the Pacific region, subducts underneath the South American plate. This leads to the accumulation of stress that will sooner or later, be released during an earthquake.

"In northern Chile, however, there is a 550 kilometer wide gap that did not experience a major earthquake since 1877," says the lead author of the current study, Jacob Geersen, from GEOMAR. "Within this seismic gap, experts expected the next mega earthquake. And at first, many scientists believed the earthquake on 1 April 2014 was this mega quake. But it affected only the central part of the gap and remained well below the expected magnitude of up to 9.0," says Geersen.

To understand the reason for the low intensity of the 2014 Iquique earthquake, Geersen and his colleagues studied the seafloor topography off northern Chile combined with seismic images that resolve the deep structure under the seafloor "It turned out that the seafloor of the Nazca plate in the affected region is not entirely flat. Instead, there are numerous extinct volcanos, so called seamounts, some of them thousands of meters high," describes co-author César R. Ranero, ICREA Research Professor at the ICM.

"Using the seismic data, we clearly identified several former seamounts, which are now located at the interface between the two plates, thereby actively deforming this interface and the overlying South American Plate," says Jacob. Geersen. Because of this roughness and the associated fractures, less stress is build up in the area around the subducting seamounts and the resulting earthquake is smaller. "In addition, the subducted seamounts probably stopped the spatial propagation of seismic rupture physically during the Iquique earthquake," says Geersen.