A new study led by the ICM has revealed new variables to be taken into account, such as fault morphology, in tsunami early warning systems. 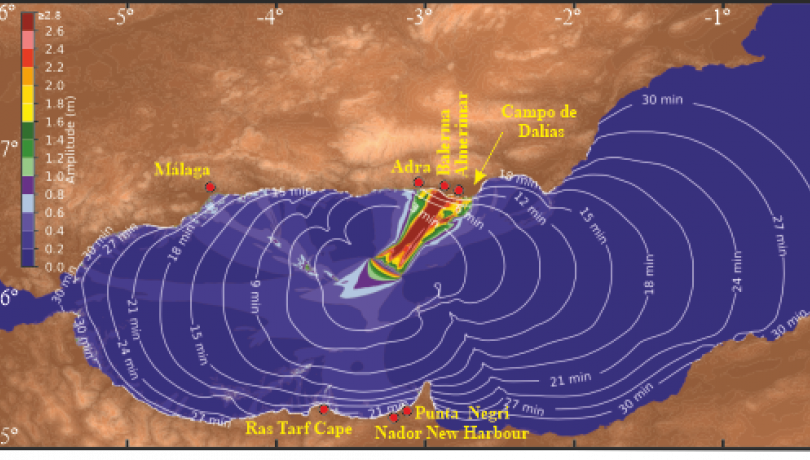 Tsunami propagation model and areas of the coastline that would be affected. /ICM-CSIC

A study led by researchers at the Institut de Ciències del Mar (ICM) has found that strike-slip faults have more potential to generate coastal tsunamis than previously thought. The work, published in the journal Scientific Reports, analyses the active Averroes strike-slip fault, located in the Alboran Sea, and reveals the nearby coastal areas that could be affected by the arrival of tsunami waves, as well as the magnitude that the inundation could reach.

"These giant waves can pose a threat to coastal populations, damage marine and land-based infrastructure, and cause an economic and environmental crisis. These results will be essential to improve planning measures to mitigate the impact of a possible tsunami", explains the ICM geologist Ferran Estrada.

Tsunamis are triggered by sudden displacements of the seafloor and are usually caused by seismic activity on normal and reverse faults. However, strike-slip faults, which separate laterally moving blocks, are usually ruled out as tsunami triggers.

"The Averroes fault has, at its northwest end, a vertical jump of up to 5.4 metres that would have generated a magnitude 7 earthquake. We have studied the activity of the fault over the last 124,000 years and, according to historical records, the last earthquake generated by this fracture may have been in 365 AD", adds Estrada.

Thanks to a mathematical model of the deformation of the sea floor, the research team has calculated the behaviour of the water masses in the Alboran Sea in the case of a new seismic episode on the fault. According to this simulation of possible scenarios, tsunami waves would propagate in two main branches and reach and inundate densely populated sectors of the southern coast of Spain and northern Morocco. These waves could be up to six metres high and would take between 21 and 35 minutes to reach the coast.

"These are episodes that are too fast for current early warning systems to operate successfully. These findings indicate that the tsunami-generating potential of strike-slip faults should be taken into account for the re-evaluation of tsunami early warning systems", concludes the ICM researcher.