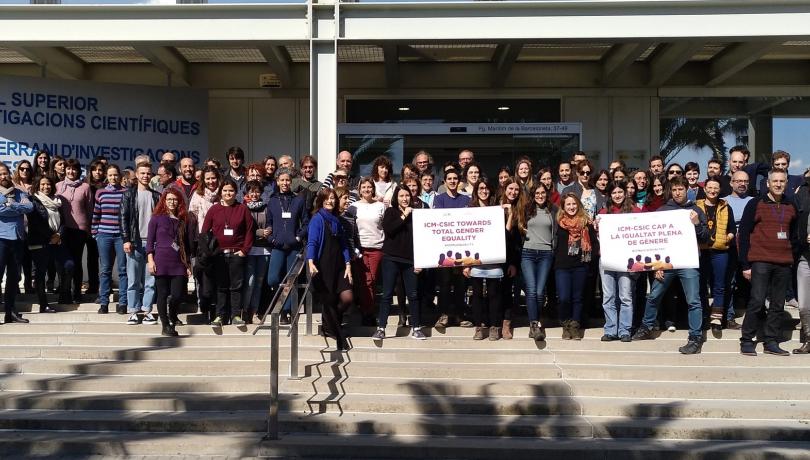 The ICM aims to have its own Gender Equality Plan ready this year.

The Institute of Marine Sciences (ICM) has been distinguished with the runner-up of the Gender Equality Distinction (Distintivo de Igualdad de Género) 2020 by the CSIC. This distinction aims to highlight the work of CSIC centers in the promotion of the gender perspective as a transversal category and the development of measures to eliminate the barriers that women may encounter during their career.

This recognition highlights the achievements of the ICM Equality Task Force since 2017 in the promotion of gender equality in the research and professional activity of the center. From 2020 onwards, progress in this area has been strengthened with the ICM participation as partners in two European projects on gender equality, LeTSGEPs and RESBIOS, and as a member of the LifeSciCoP community of practices.

"We are delighted to share this distinction with the ICMAT and the IDAEA, as well as with the CSIC centers recognized in the two previous editions, thus stressing the value of our complementary work to achieve a balanced gender perspective in our research centers", state the members of the ICM Equality Task Force, who add that "there is still a long path to go, but this recognition encourages us to move forward on the roadmap we have established".

The ICM Direction team congratulated the Equality Task Force and declared that it is "a well-deserved recognition, which inspires confidence to continue committed as a research organization with a more egalitarian working environment".

The ICM Equality Task Force has been actively involved in the organization of awareness-raising activities on gender equality within the framework of the International Day of Women and Girls in Science (11th February.) and the International Women’s Day (8th March), with significant participation of ICM researchers and technicians.

As part of the activities developed in the LeTSGEPs project, it stands out the organization of the first meeting of CSIC Equality Commissions by the ICM, which took place online in December 2020 and brought together one hundred professionals from 35 of the CSIC research centers.

The ICM is currently engaged in the development of its own Gender Equality Plan, as one of the LeTSGEPs project’s main objectives.  This plan, aligned with the CSIC Equality Plan, is expected to lead to structural changes in the institution that will better address gender bias in the ICM.

The plan responds to ICM’s priority to adopt the gender perspective at all levels of the budgeting process to place gender equality at the forefront of decision-making on the acquisition and allocation of resources.