The ICM celebrates the 70th anniversary of the creation of the Instituto de Investigaciones Pesqueras, the cradle of marine research in Spain

From its beginnings in the 1950s, the IIP had laboratories in Blanes, Castelló, Vinaròs, Vigo and Cádiz, from which new centres sprang up. 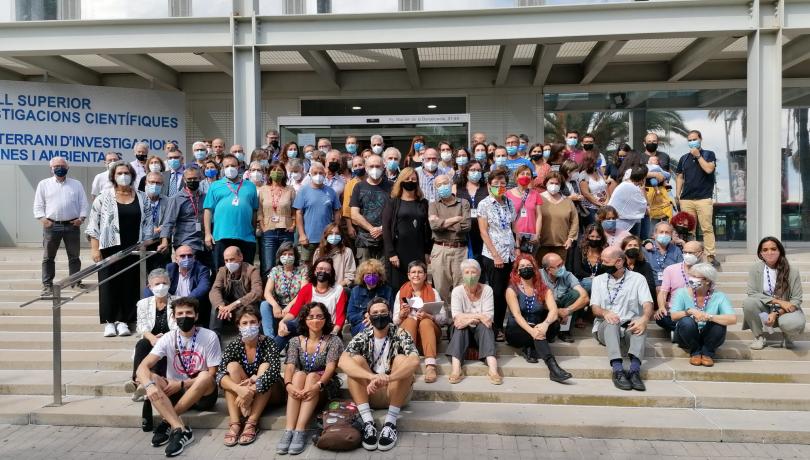 Group photo of the researchers attending the anniversary celebration, which was held in person and virtually / ICM-CSIC.

Today marks the 70th anniversary of the Fisheries Research Institute (IIP by its Spanish acronym) of the Spanish Council for Scientific Research, centre from which the six current Spanish marine research institutes emerged, including the Institute of Marine Sciences of Barcelona (ICM-CSIC). The IIP was created in 1951 with the aim, as its name suggests, of gaining in-depth knowledge of the fishing activity.

Professor Ángel Guerra, director of the Instituto de Investigacións Mariñas de Vigo, explains that the IIP "acted as a key agent and a germ for the configuration of the current Iberian panorama of research and innovation focused on the ocean, aquaculture, climate and the sustainable and healthy use of marine resources."

For his part, the director of the ICM-CSIC, Josep Lluís Pelegrí, explains that "the Fisheries Research Institute was a centre for work, meeting and the training of pioneering research teams in marine sciences, whose influence and vision enabled the focus of studies to be broadened and diversified. People like Professor Ramon Margalef, teacher of a whole generation of ecologists, introduced studies on plankton and its dynamics." These studies ended up acquiring a special relevance in the Institute, which would thus be introduced in fields such as oceanography or marine geology.

Although the headquarters of the IIP-CSIC were in Barcelona, the Institute had laboratories functioning in Blanes, Castelló, Vinaròs and Vigo since the beginning. A little later, in 1955, a fifth laboratory was created in Cadiz. In 1979, all of them acquired their independence and autonomy, creating a series of institutes that, united by this common past, would continue to mark the history of marine and aquaculture research on the peninsula.

In 1985, it was Blanes laboratory’s turn and it became the Centre d'Estudis Avançats de Blanes (CEAB-CSIC). Finally, in the year 2000, the Oceanographic Vessel Management Unit of the IIP-CSIC became a technological and logistical support centre for the entire Spanish oceanographic community, the Marine Technology Unit (UTM-CSIC).

Seven decades at the forefront of marine research in Spain

Among the milestones of the centres that were spun off from the IIP-CSIC are the installation, in 1988, of the first Spanish Antarctic Station, the Spanish Antarctic Base Juan Carlos I, and the management by the UTM-CSIC, during all these years, of the major Spanish oceanographic infrastructures, the oceanographic ships Hespérides (1991) and Sarmiento de Gamboa (2008).

On the other hand, it is also worth mentioning the incorporation of the IATS-CSIC and the IIM-CSIC into the select group of EU infrastructures of excellence in aquaculture research (AQUAEXCEL) and the increase in multidisciplinarity in the latter centre, with the opening of projects on food safety, circularity or industrial bioprocesses, among others. On the ICMAN-CSIC’s part, the opening of the first pilot plant for marine cultivation focused on their exploitation by a company (CUPIMAR) also stands out.

This anniversary coincides with the start of the Decade of Ocean Sciences for Sustainable Development (2021-2030) proclaimed by UNESCO, and demonstrates the fundamental importance of marine science for the sustainable development of our society. This research, innovation and communication work is now more urgent than ever and will continue to be carried out for many decades to come, thanks to the efforts of the heirs of the IIP-CSIC.

The ceremony to celebrate the 70th anniversary of the IIP-CSIC was held at the headquarters of the ICM-CSIC and the UTM-CSIC in Barcelona, which is the main centre of marine and polar scientific and technical knowledge, not only in Spain, but also in the whole Mediterranean. In addition to the ICM-CSIC and the UTM-CSIC, the event was attended by members of all the other centres that emerged from the IIP-CSIC in 1979.

The event included speeches by the current director of the ICM-CSIC, Josep Lluís Pelegrí, and Professor Ángel Guerra of the IIM-CSIC in Vigo, co-author of the anthology El Instituto de Investigaciones Pesqueras: tres décadas de historia de la investigación marina española (The Fisheries Research Institute: three decades of history in Spanish marine research). This was followed by three round tables on the past, present, and future of fisheries, marine resources and aquaculture, data collection and its usage, and ocean communication and culture. The debates were attended by members of all the centres invited to this celebratory event.