The station will collect data on the water current, temperature and salinity at three meters depth, which will guarantee the continuity of the time series of oceanographic and meteorological data of Josep Pascual, the longest in the Mediterranean. 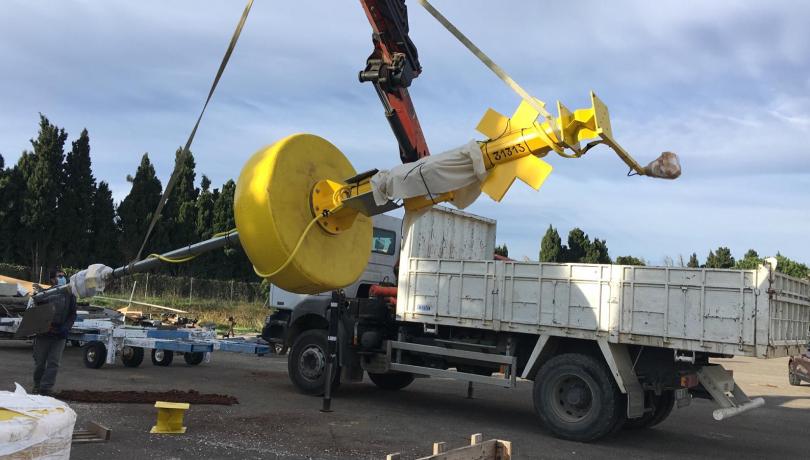 The Institut de Ciències del Mar (ICM) has installed an automatic oceanographic station in the marine reserve of the Medes Islands (Costa Brava) that will collect data on the current, the temperature and the salinity of the water at a depth of three meters, apart from a series of meteorological data including the intensity and direction of winds, air temperature, rainfall, atmospheric pressure or relative humidity.

All these data are collected very close to where Josep Pascual has been carrying out, for more than forty-seven years steadily, daily meteorological measurements that are providing the longest combined series of oceanographic and meteorological data in the Mediterranean. This record is invaluable for documenting the climate-change effects on the ocean, including the temperatures and sea-level rise.

This is a pilot experience in which the Montgrí, Medes Islands and Baix Ter Natural Park and the ICM collaborate. The new station lies in one of the signalling buoys of the integral marine reserve that is located within the Park, thus taking advantage of an operational structure of the reserve.

"We have taken care of the instrumentation and the Park staff has been in charge of acquiring the signalling buoy and putting it into the water, which has reduced our mooring costs", states the researcher from the Department of Physical and Technological Oceanography of the ICM Joaquín Ballabrera, who has coordinated the project for more than two years.

"This is an effort by many people from the ICM-CSIC, from the personnel of the Instrumentation and Informatics Services to scientists from all departments", adds Ballabrera, who details that the idea of ​​installing an automatic station of these characteristics in the Medes Islands emerged from a meeting between Josep Pascual, Ramón Alturo -the director of the Park- and several researchers from the ICM.

On the other hand, researchers from the Department of Physical and Technological Oceanography have been responsible for processing the data and have created the web page where they are displayed, while the Scientific Computing, Data Science, and Informatics Services have collaborated in the definition of protocols and have made it possible to obtain the certificates that enable the functioning of the webserver.

All this work, however, would not have been possible without the commitment of the members of the Instrumentation Service, who have designed, calibrated, assembled and verified the correct operation of the station and that of the Park patrons. Specifically, Quim Aragonès has worked in close cooperation with the ICM-CSIC to bring this project to a good end. In case of success, this pilot experience would help to guarantee the continuity of part of the time series collected by Josep Pascual.

All the data can be consulted in real time through the following link where the different oceanographic, historical and current, information related to the Park will be compiled.