Experts from the Institut de Ciències del Mar (ICM) and other European institutions suggest that the ideal growth temperature for this toxic microalga of tropical origin will occur earlier in spring and persist into autumn. 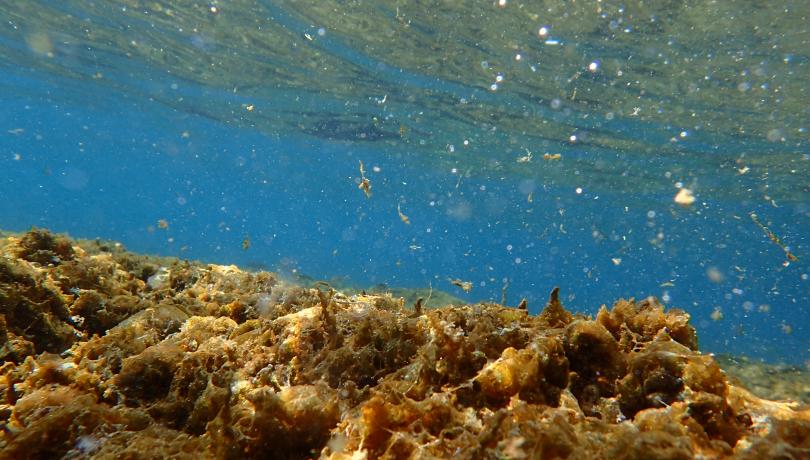 Image of the Ostreopsis bloom covering the seabed / Cecile Jauzein

Ostreopsis is a microalgae genus of tropical origin, frequently reported along Mediterranean beaches since the end of the 20th century. Its reproductive period lasts roughly from the end of spring to the end of summer or early autumn when water temperature ranges from about 21 to 25˚C.

According to an international group of researchers, including experts from the Institut de Ciències del Mar (ICM) in Barcelona, using biological models provided by the Med-CORDEX initiative which are based on climate projections, is it possible to see that in the coming years the blooms of these microalgae will appear earlier and last longer, extending from spring to autumn.

This is one of the main conclusions of the European project CoCliME, which over the past three years has worked to decipher the future trends and impacts of the blooms of the genus Ostreopsis. Partners in this initiative, which is now coming to an end, include, include the ICM, the Institute of Environmental Assessment and Water Research (IDAEA-CSIC), the Laboratoire d'Oceánographie de Villefranche (LOV), the Ifremer and the Université de Nantes.

"This indicates that blooms will last for a longer period, but will be less intense in summer because the temperatures are likely to become too warm (between 25.5 and 28˚C)", state LOV researchers Salomé Fabri-Ruiz and Jean-Olivier Irisson, who do not rule out that Ostreopsis could adapt to warmer conditions in the future. In fact, the progressive warming of the seawater seems to be facilitating the spread of this genus in the Atlantic, from the Bay of Biscay to Brittany.

Ostreopsis has a brown-reddish colour due to its photosynthetic pigments. Thus, when it reproduces intensely and reaches high cell numbers, brown-reddish floating aggregates and mucilages covering the seafloor in the shallow beaches are found. These cells produce different noxious substances that are reported to cause massive mortalities of certain marine fauna, especially sea urchins.

“Ostreopsis toxins can affect marine organisms (fauna and flora) and are found in the water during the blooms”, explain Elisa Berdalet, from the ICM, and Anne-Sophie Pavaux and Rodolphe Lemée, from LOV. Also, Ostreopsis toxins have been reported in seafood, but, no human food poisonings have been observed in the Mediterranean.

According to Elisa Berdalet and Magda Vila (also from the ICM), in the Mediterranean, the main effects of toxic Ostreopsis blooms on human health are associated with direct exposure to seawater with high Ostreopsis cell concentrations, and the inhalation of aerosols containing irritative chemicals produced under certain circumstances during the blooms.

“The acute symptoms of this exposure are ophthalmologic, digestive, respiratory and dermatologic”, add the CoCliME collaborators, Rafael Abós-Herràndiz and Luc de Haro, who warn that the effects of the chronic exposure are unknown.

In this regard, within the CoCliME project, a six-year epidemiology study was carried out in an Ostreopsis hot spot and revealed that, for the specific zone, people could experience Ostreopsis-related symptoms mainly during a few days along with the bloom, mainly in July (under the present climate conditions).

The complex ocean-atmosphere interactions involved in the toxins aerosolization are experimentally studied by Noemí Inmaculada Medina-Pérez and Manuel Dall'Osto (both from the ICM).

Nowadays, the general public is poorly aware of the human health and ecological problems associated to the Ostreopsis blooms. Thus, these events are not perceived currently as a socioeconomic risk either. “Because of this, it is too early to observe societal adaptation strategies”, state Muriel Travers, Gildas Appéré and Jérémy Thomas, from the University of Nantes. Nevertheless, given the recurrence and future predicted persistence of such Ostreopsis blooms in Mediterranean Sea touristic areas, blooms may become a major socioeconomic issue in the future if the events result, for instance, in stopping or reducing beach-going among tourists and residents.

Given this scenario, CoCliME jointly co-developed, with local stakeholders, a cost-effective beach monitoring and health surveillance system to effectively prevent Ostreopsis impacts on human health. These efforts to support an Ostreopsis monitoring programme and early warning system facilitate continuity and will help to extend the existing Ostreopsis time series in the Mediterranean, but also to draw future projections of toxic Ostreopsis blooms.