What do marine sediments tell us about the Earth's climate?

The muds that slowly settle to the seafloor are archives that preserve a lot of information about the evolution of the climate and oceans over time. 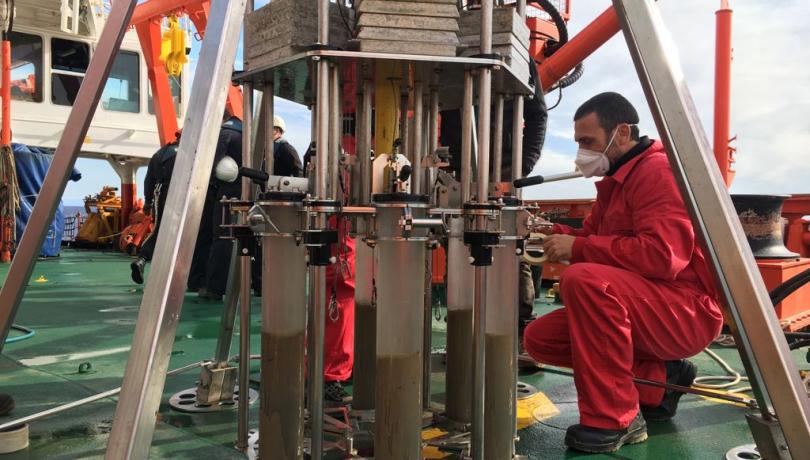 Did you know that marine sediments are like a kind of book that tells us things about the evolution of climate in the past? In the same way that tree rings provide us with information about past rainfall, drought and other environmental conditions, the muds that slowly settle to the seafloor are archives that preserve a lot of information about the evolution of the climate and oceans over time.

This information recorded in marine sediments, however, is not easy to read, as it is encoded in many ways, for example as chemical element ratios, organic molecules or isotope ratios, both in the marine sediment itself and in certain fossils of organisms that are often found in the sediment.

The encoding through certain organic molecules, the so-called molecular biomarkers, provides us with information, for example, about the surface temperature of seawater in the past. In this particular case, we are studying compounds called alkenones, which are synthesised in the uppermost layers of the water column by haptophytes, a group of single-celled algae that are part of the phytoplankton.

Analysis of these compounds in marine sediments allows us to reconstruct the temperature of the surface waters at the time when the haptophytes lived and synthesised them. This ratio of compounds is therefore one of the most widely used 'palaeothermometers' in palaeoceanographic studies.

Marine fossils also provide information about the oceans in the past

Regarding the fossils often found in marine sediments, some of the most interesting for palaeoceanographic reconstructions are foraminifera, which are single-celled organisms that form calcium carbonate shells.

The ratio of magnesium to calcium in these shells is also used as a palaeo-thermometer, while the ratio of the different oxygen isotopes is normally used to establish the time frame, i.e. to get a first approximation of the age of the sediment that is being studied. To further refine the dating, these foraminifera can also be dated using carbon-14, a radioactive carbon isotope that is also widely used in archaeological dating.

At the Institut de Ciències del Mar (ICM), within the Marine Biogeochemistry, Atmosphere and Climate Group, these sedimentary records are studied for paleo-reconstructions. In terms of study areas, in the past, researchers have focused on the Pacific and Southern Oceans, mainly because of their role in regulating carbon dioxide concentrations in the atmosphere. However, more recently, reconstructions of the Mediterranean are being carried out at different time scales.

In the Central Mediterranean, in the Strait of Sicily, for example, the scientific team has recently generated a record of more than one million years based on molecular biomarkers where, among other parameters, changes in sea surface temperature have been reconstructed with the alkenone palaeothermometer discussed above.

This record is truly pioneering, as the others that have been published so far using this same method for the Mediterranean only cover the last 250,000 years. Specifically, this new record clearly shows the thermal oscillations associated with the characteristic alternations between cold (glacial) and warm (interglacial) periods that have dominated the Earth during the last millions of years, with periodicities of between 41,000 years in the past and 100,000 years more recently.

In addition, this research group is working on the development of new methods to reconstruct other important parameters such as acidity (pH) and dissolved oxygen levels in seawater, or nutrient concentration. Regarding pH, in collaboration with researchers from the Faculty of Geology of the University of Barcelona (UB), the precise analysis of the boron isotope ratio of foraminifera shells is being set up and, in relation to oxygen levels, work is being carried out on a series of organic compounds that degradate differently depending on the amount of oxygen available.

Finally, in terms of nutrients, another very promising type of marine climate archives is being studied, namely cold water corals. These corals are very slow-growing, and a record of environmental changes is also preserved in their skeleton. Through aquarium experiments in the Zone of Aquaria and Experimental Chambers of the ICM, it is being assessed, for example, whether the analysis of phosphorus in the coral skeleton would allow the reconstruction of phosphate concentrations (an essential nutrient for phytoplankton) in seawater in the past.

This text belongs to the 'In depth' section of the ICM newsletter. Subscribe here.