The research team aims to understand and predict how the Costa Brava beaches will change in the coming decades. 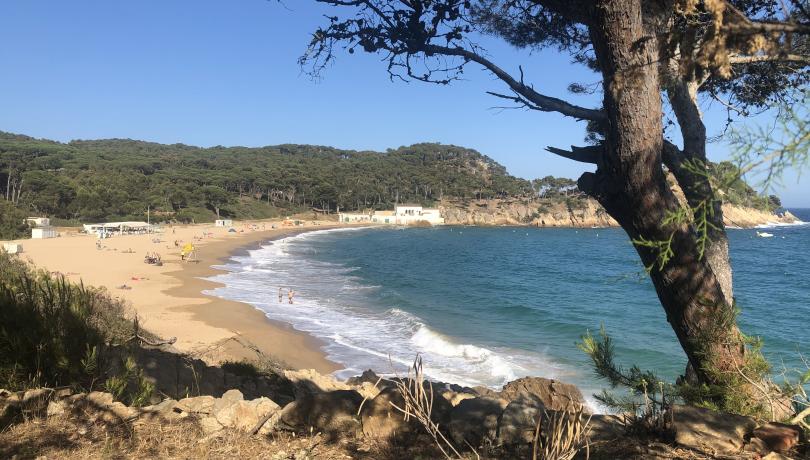 Last June, the Institut de Ciències del Mar (ICM) in Barcelona installed, as part of the MOCCA project of the National Plan, a CoastSnap type station to monitor, together with the citizens' help, the evolution of the coastline on the Castell beach, which is settled in Palamós.

This station consists of a DIN-A4 sized stand with views over the beach that can be used by anyone passing by to take photographs of the beach and send them to the ICM. Thanks to the analysis of these snapshots, ICM researchers will be able to see the changes that the coastline has undergone at this point in the Costa Brava.

"The project’s ultimate goal is to understand both the reaction of the beach to storms, that is, how it erodes and recovers after them, and the long-term evolution of the coastline", explains Gonzalo Simarro, one of the ICM researchers in charge of this project.

This technique, which consists of repeatedly taking photos from the same point, has been used by ICM researchers before to measure the impact of storms on the coast. One of the main advantages is that it allows the position of the coastline to be determined from the photographs with a precision similar to that of professional surveying equipment.

"This system is a complementary alternative to fixed monitoring stations, and is also of interest in places where it is impossible to travel from research centres to obtain observations with the needed frequency", expose Ruth Durán, another of the ICM researchers involved in this project.

On the other hand, Durán stresses that, "in this type of project, coordination at both international and national level -a project has just been awarded in which, in addition to the ICM, centres from Galicia, Andalusia and the Balearic Islands also participate- makes it easier to establish the necessary protocols for obtaining high-quality data".

During this first month, researchers have received dozens of photographs which they consider to be very valuable coastal data, and thanks to which they expect to understand and predict how the Costa Brava beaches will change in the coming decades.

CoastSnap was born in 2017 as a pilot project between the UNSW Water Research Laboratory and the Department of Planning, Industry and Environment of New South Wales (Australia). In this case, two CoastSnap stations were installed on Sydney's northern beaches with the aim of developing algorithms to map shoreline changes from images made by citizens.

Now, in addition to Australia, CoastSnap has shoreline monitoring stations in the United States, the United Kingdom, Belgium and Spain, among others.

Citizen science projects such as this one highlight that citizens can play a key role in providing continuity to historical series whose value lies in acquiring the data in the same way over time.