This citizen science event has also recorded observations of two species that had not been found until now in Catalonia. 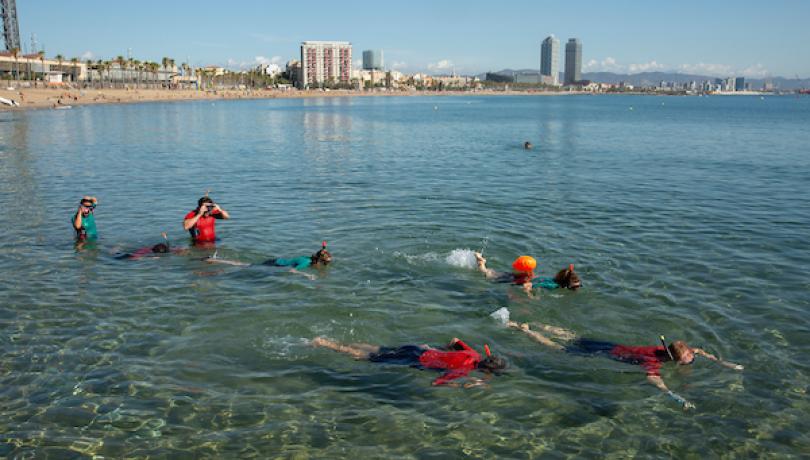 The BioMARató-Beaches with life, a citizen science event that organised various snorkelling and diving activities during the summer, detected 24 alien species along the Catalan coastline. The initiative was coordinated by one of the ICM's research groups within the framework of the European project Cos4Cloud. The activity has counted with the support of scientists from the centre to analyse the marine species observations sent in by more than a hundred volunteers.

The photographs and species identifications were taken in several locations along Costa Brava, Costa Daurada and the beaches of the Barcelona metropolitan area. In addition to the identification of 24 alien species, the results of the BioMARató include the case of two marine organisms that had not been found in Catalonia until now: the blenny Hypleurochilus bananensis and the mollusc Laona ventricosa.

The observations have already been validated and are available to the entire scientific community on the citizen science platform Natusfera and, according to Jaume Piera, ICM researcher, associated CREAF researcher and coordinator of the European project Cos4Cloud, "the observations can be used for any marine ecosystem research, as well as to improve the management policies of some species".

Piera highlights that "as well as being a valuable source of data, these types of activities are a very effective way of promoting the conservation of the marine ecosystem, as well as learning about its richness".

Alien and invasive species on the Catalan coastline

The 24 alien species identified by the participants include the red seaweed Asparagopsis armata and the green seaweed Caulerpa cylindracea, both of them were introduced into the Mediterranean from Australia and are considered invasive. Both put at risk to native species, as they compete with them for space and resources. In particular, Caulerpa cylindracea is a threat to Posidonia oceanica and Cymodocea nodosa meadows, two protected species.

In addition, the crab Percnon gibbesi, which has an Atlantic origin, has been detected and is also considered an invasive species. This organism is spreading rapidly along the coast and is a carrier of new parasites that can affect native crabs.

Other exotic but non-invasive species reported include the coral Oulastrea crispata, the jellyfish Phyllorhiza punctata and the sponge Paraleucilla magna.

Xavier Salvador, the ICM researcher in charge of reviewing, validating and analysing the observations, clarifies that "alien species are those that have arrived or have been introduced, voluntarily or involuntarily, to places outside their ecosystem, but not all of them are invasive, since many establish themselves in small populations and do not significantly affect the environment". The species considered invasive, Salvador continues, "are only those that adapt to the new ecosystem, compete with the native species of the area for space or resources and can even displace them".

During the BioMARAtó participants have also reported two observations of organisms that until now had not been located in Catalonia: Hypleurochilus bananensis, a blenny of which only a few populations are known in Spain, and the mollusc Laona ventricosa, a native species from North Atlantic Ocean, so far in the Mediterranean has only been detected in Andalusia.

The BioMARató aimed to photograph as many living organisms on the Catalan coastline as possible, identify the species and upload them to the citizen science platform Natusfera. For this purpose, the event organised several diving and snorkelling activities in l'Ametlla de Mar, Lloret de Mar, Calonge i Sant Antoni, Badalona, Sant Adrià del Besòs and Barceloneta beach.

A total of 117 people took part and collected more than 10,000 observations of 1061 different species. The region that collected more photographs is Girona, with 4639 observations, followed by Barcelona, 3562, and Tarragona, 1822. The area that reported more different species was Girona (534), followed by the 496 species identified in Barcelona and the 312 reported in Tarragona.

The diving and marine environment dissemination centres that have organised the activities state that "knowing about marine species and learning how to identify them raise awareness in society about their importance and how to care for them. It also helps people perceive the sea as a rich living system, very close and often unknown".

In this sense, Olivia Álvarez, one of the volunteers who has collected more observations in the area of Barcelona, comments that "Barcelona has a lot of marine life, more than I thought. I was surprised to find a seahorse on the San Sebastián beach, we have a huge biological diversity and we are not aware of it". For Oriol Deu, another of the most active participants, "I think citizen science creates a visible and close link between science and society".

The BioMARató-Beaches with life event was led by the European Horizon2020 Cos4Cloud project, coordinated by the ICM-CSIC. It also count with the collaboration of the company Anèl·lides - Serveis ambientals marins, the environmental association Xatrac, two diving centres: Oceánicos and Plàncton Diving, and the town council of Calonge i Sant Antoni, which organised and coordinated the various snorkelling and diving activities throughout the summer.